Where We Travel in Alaska

We travel to Alaska’s National Parks and Protected and spend at least a full day at each destination exploring the area’s unique biota and adventure activities. Click a title for more information about each destination.

Denali National Park is the crown jewel of Alaska. At 6 million acres, the park is larger than the state of Massachusetts. Alaska's most famous wildlife lives here including grizzly and black bears, moose, caribou, wolves, Dall sheep, red fox and arctic hares as well as bird life galore. Since there are no trees in most of the park, the wildlife viewing is great.

Wrangell St. Elias National Park is the largest national park in the U.S. (13.2 million acres) and is part of one of the largest protected areas in the world. Four major mountain ranges can be found here; the Chugach, St. Elias, Alaska and Wrangells, containing six of North America's highest peaks.

The 300 square mile Harding ice field caps the Kenai Mountains on the southern Kenai Peninsula and sends scores of glaciers into the nutrient rich Resurrection Bay. This is the Kenai National Wildlife Refuge. Our access to the park is via the small harbor town of Seward.

The Kenai Mountains rise over the turquoise colored water of the Kenai River to create an outdoor lover's paradise and one of our favorite destinations. Originally set aside by President Roosevelt in 1941 as a refuge for moose, Dall sheep and other game, the Kenai National Wildlife Refuge has since been expanded to nearly 2 million acres.

Often referred to as the 'Little Switzerland" of Alaska, Valdez is beautifully situated at the base of the towering Chugach Mountains on the shores of Prince William Sound. Made famous by the Alaska Pipeline, and later the Exxon Valdez oil spill, Valdez has since become a popular tourist destination. Visitors are attracted to the lush landscape, high concentration of glaciers and great fishing.

Our destination is the Matanuska Glacier, the largest accessible glacier in Alaska. The glacier winds down from the Chugach Mountains and is four miles wide at the terminus where it forms the Matanuska River.

The 135-mile unpaved road between Denali National Park and Tangle Lakes travels along the south side of the Alaska Range and was the original road to Denali National Park. The views of the Alaska Range, dozens of free flowing rivers (including the mighty Susitna River) and countless lakes are superb. En route we'll look for wildlife, visit at an old abandoned miner's cabin and explore the treeless tundra. This is remote and wild country!

Learn more about each destination 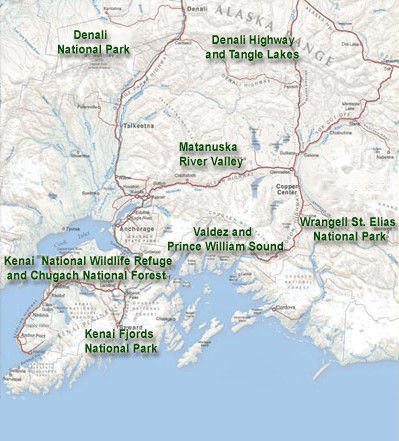 We’d be happy to answer all your questions.


Our tour group sizes are small and our hearts are big.
Learn more about our commitment to low impact sustainable travel.

Since 2001, thousands of happy campers

I would rate my experience a 10. I enjoyed this trip very much.

Each adventure/experience was a true high! I had a great time!

Recognized by National Geographic Adventure One of the Best Adventure Travel Companies on Earth!

Alaska Outdoors, LLC is a member of the following organizations